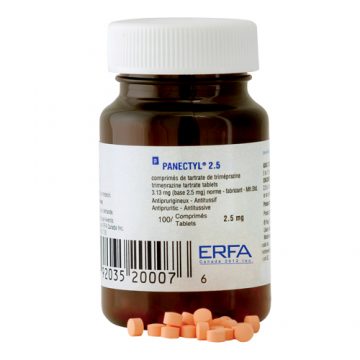 Neutral tartrate of 10-[3-(2-methyl) dimethylaminopropyl] phenothiazine. Its structural formula may be represented as follows: (see pdf)

Panectyl is a phenothiazine derivative with reduced central activity and enhanced antihistaminic and antipruritic effects. It has marked sedative, antiserotonin, antispasmodic and antiemetic properties but has only a weak effect on the autonomic nervous system.

States of CNS depression due to barbiturates, alcohol, narcotics or analgesics. Cases with a history of blood dyscrasias or severe allergic reactions related to trimeprazine or other phenothiazines.
Trimeprazine is contraindicated for use in children less than two years of age. (see Warnings section).

Patients should be advised against driving or engaging in activities requiring complete mental alertness or physical co-ordination, until their response to the drug has been well established.

Use in pregnant women is not recommended except when, in the judgement of the physician, it is necessary for the welfare of the patient.

Trimeprazine is contraindicated for use in children less than two years of age due to the risk of marked sedation and respiratory depression.

Panectyl should be used with caution when there is a risk of potentiating CNS depressant drugs such as opiates, analgesics, antihistaminics, barbiturates and alcohol. It should also be used with caution in patients with a history of convulsive disorders or liver disease, and in cases of jaundice.

Since phenothiazines are known to reverse the pressor effect of epinephrine, if hypotension should occur, epinephrine should not be used as it may depress further the blood pressure.

The drug should be used cautiously in severely ill or dehydrated children who are more susceptible to seizures associated with phenothiazines.

The antiemetic action of Panectyl may obscure signs of intestinal obstruction or brain tumor.

Ingestion after meals prolongs absorption of the drug, thus reducing incidence of possible side effects.

At recommended therapeutic dosages, Panectyl is usually well tolerated. Side effects that are likely to occur may be listed as follows :

Central nervous system
Drowsiness is the most common initial untoward reaction but tends to subside within one to three weeks. It occurs most frequently in older age groups, and often with daily doses of 30 mg or more. Its incidence and intensity can be minimized by starting at a low dosage, gradually increased, or by prescribing the drug after food to promote a more gradual absorption. Should drowsiness persist it can be alleviated by decreasing dosage.

Convulsions have been reported.

Extrapyramidal symptoms such as tremor, spasticity, painful contractions of skeletal muscles, dystonias have rarely been noted.
Acute dystonias or dyskinaesias, usually transitory, are more common in children and young adults and usually occur within the first 4 days of treatment or after dosage increases.
Akathisia characteristically occurs after large doses.
Parkinsonism is more common in adults and the elderly. It usually develops after weeks or months of treatment. One or more of the following may be seen: tremor, rigidity, akinaesia or other features of Parkinsonism. Commonly, just tremor is seen.
The occurrence of tardive dyskinaesia, if it occurs, is usually, but not necessarily, after prolonged or high dosage. It can occur after treatment has been stopped.

If a neuromuscular reaction occurs, medication should be stopped and not reinstituted in children or in pregnant patients, while in others it may be resumed later, at a lower dosage. After discontinuation of treatment, extrapyramidal symptoms usually subside gradually within 24 to 48 hours. If a counteractant is necessary, barbiturates or an antiparkinsonian agent may bring rapid relief.

Other infrequent side effects reported include disturbing dreams, elation, depression, and fainting.

Gastrointestinal system
Gastric upset, abdominal discomfort and nausea may occur but usually disappear after a few days of medication. A few cases of cholestatic jaundice have been reported.

Skin
Drug rash and dermatitis have been observed in very few patients.

Allergic or Toxic
Very rare cases of reversible agranulcytosis and leukopenia have been reported. This reaction has responded to immediate withdrawal of trimeprazine and administration of antibiotics and corticosteroids. Since most reported cases of agranulocytosis, associated with the administration of phenothiazines, have occurred within the first ten weeks of treatment, patients on prolonged therapy should be observed for this reaction particularly during that period.

Neuroleptic malignant syndrome (NMS) has been reported in the context of Trimeprazine overdose. Symptoms of NMS include a combination of hyperthermia, muscle rigidity, altered mental status and autonomic instability. Since this syndrome is potentially fatal, Trimeprazine must be discontinued immediately, and intensive clinical monitoring and symptomatic treatment must be initiated. Strict adherence to the recommended dose is critical (see also Dosage section).

Treatment
There is no specific antidote and treatment should be symptomatic. Gastric lavage should be carried out and the stomach left empty. Centrally acting emetics will not help because of the antiemetic effect of Panectyl. Keep a clear airway and maintain adequate hydration. If stimulants are necessary use caffeine or sodium benzoate but avoid those that may cause convulsions (e.g. picrotoxin and pentylenetetrazol).

Should collapse occur, put the patient in the head-down position; use norepinephrine in an intravenous infusion of dextrose in normal saline, but not epinephrine as it may further depress the blood pressure. The infusion must not be stopped abruptly, but the drip rate reduced gradually when the desired blood pressure is reached.

Like other phenothiazine derivatives, trimeprazine is not dialysable, so that hemodialysis is unlikely to assist recovery from overdosage, unless some other agents (e.g. barbiturate), have been taken concurrently.

Trimeprazine is a propylamino phenothiazine derivative with reduced central effects and enhanced antihistaminic and antipruritic effects.

It is a potent histamine antagonist. Trimeprazine possesses sedative properties, and is active in suppressing apomorphine-induced vomiting in the dog.

Panectyl has practically no effect on the hypertensive peaks due to intravenous injection of epinephrine in the dog; it shows little activity against norepinephrine and is a poor antagonist of acetylcholine even at high doses. Intravenous doses of 1-5 mg/kg of body weight of trimeprazine produced negligible hypotensive effects in the dog, rabbit and cat.

The spasm of the isolated rabbit intestine induced by 1.5 mg of acetylcholine per litre of solution is 50% inhibited by 1 mg of trimeprazine per litre.

Toxicity
In the mouse the LD50 is 75 mg/kg I.V.; 300 mg/kg S.C.; 230 mg/kg P.O. Sudden loss of muscular tone, intense sedation and death due to respiratory arrest toward the 24th hour were observed after I.V. injection.
Dogs tolerated daily oral doses up to 24 mg/kg for three days but one dog, after receiving 50 mg/kg by stomach tube, rapidly collapsed within 5 minutes and died within 24 hours.

Three groups of ten adult male white rats received 0, 5 and 10 mg/kg/day for 8 weeks. All the animals were alive and well at the termination of the experiments and no significant differences were noted in the average red, white and differential cell counts of the three groups.

Dogs given daily doses of 3 mg/kg I.M., 10 mg/kg S.C., or 10 mg/kg P.O. for 4 consecutive weeks revealed a normal gain in weight, maintenance of normal behavior, good local tissue tolerance at the sites of injection and satisfactory gastrointestinal tolerance. Hepatic and renal function tests as well as macroscopic and microscopic examinations of the various organs showed no abnormalities.

Ten New Zealand white does received daily oral doses of approximately 3 or 100 mg of trimeprazine per kg of body weight from the eighth to the fifteenth day of pregnancy inclusively. No abnormality was detected on microscopic, radiographic, or detailed anatomical examination in the 76 fetuses born to these rabbits, except for one fetus with only one kidney, which was considered to be a natural renal abnormality.
Trimeprazine was fed in powdered diet at the rate of 50 mg/kg to 12 female and 6 male rats for a pre-mating period of fourty days and then throughout the ensuing gestations and lactations. Eighty-four days after pairing, six females had produced litters and three of the young died or were destroyed by the mother shortly after birth. No evidence of any teratogenic effect was seen in the young, examined in detail.

The dosage may vary with patients. In most cases a low dosage is effective, but it should be adjusted according to the severity of the symptoms and patient’s response.

Adults - 2.5 or 5 mg twice a day after meals plus 5 mg at bedtime. In predominantly nocturnal conditions, a single dose of 5 to 10 mg at bedtime.

Use of higher dosages in hospitalized adult patients
Daily dosages of up to 80 mg (in divided doses) may be used occasionally in cases of severe pruritus resistant to the usual doses.

Because pronounced drowsiness is expected to occur, these dosages should be given only to hospitalized adult patients.

Do not exceed the recommended dose. (see also Overdose section)