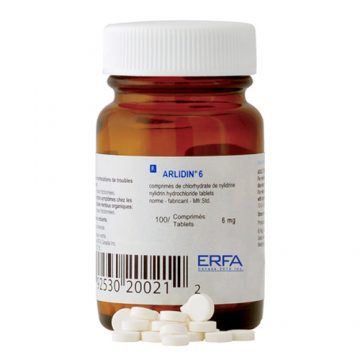 Nylidrin acts predominantly by beta receptor stimulation. It has been shown to dilate arterioles in skeletal muscle and to increase cardiac output. An increase in cerebral blood flow and a decrease in vascular resistance have also been reported. The result of this combination of actions is a greater blood supply to ischemic tissues, with usually minimal change in blood pressure.
The mechanism whereby nylidrin may provide relief of selected symptoms in some elderly patients with organic brain disorders is not known.

May be of benefit in elderly patients with mild to moderate symptoms that are commonly associated with organic mental disorders. Short-term (3-month duration) and long-term (12-month duration) clinical studies have demonstrated a modest improvement in ability to perform general activities of daily living, self care and in a capability for social interactions.

Although the patients appeared to be less confused, more alert, and more aware of their surroundings, an objective improvement in cognitive function has not been quantitatively determined.

While improvement does occur in advanced cases, experience has shown that the better the condition of the vascular bed the greater the degree of early therapeutic benefit.

Nylidrin should not be initiated before a careful diagnosis of chronic organic brain syndrome or organic mental disorder is established since it is essential to identify the many treatable or reversible conditions or mental changes in those patients that will benefit from specific therapy.

Among the most common causes of reversible or treatable organic mental disorders are drug induced mental changes and those due to alcohol, metabolic imbalances, nutritional deficiencies, hepatic cardiovascular and pulmonary conditions, trauma, tumors and particularly depressive and other emotional disorders.

Nylidrin is not indicated in the management of normal aging or of patients with presenile dementia (Alzheimer's disease).

Pregnancy and Lactation: Safety during pregnancy and lactation has not been established; therefore, it should not be administered to women of child bearing potential unless the expected benefit to the patient outweighs the potential hazard to the fetus.

In patients with cardiac disease such as tachyarrhythmias and uncompensated congestive heart failure the benefit to risk ratio should be weighed prior to therapy and reassessed periodically during treatment.