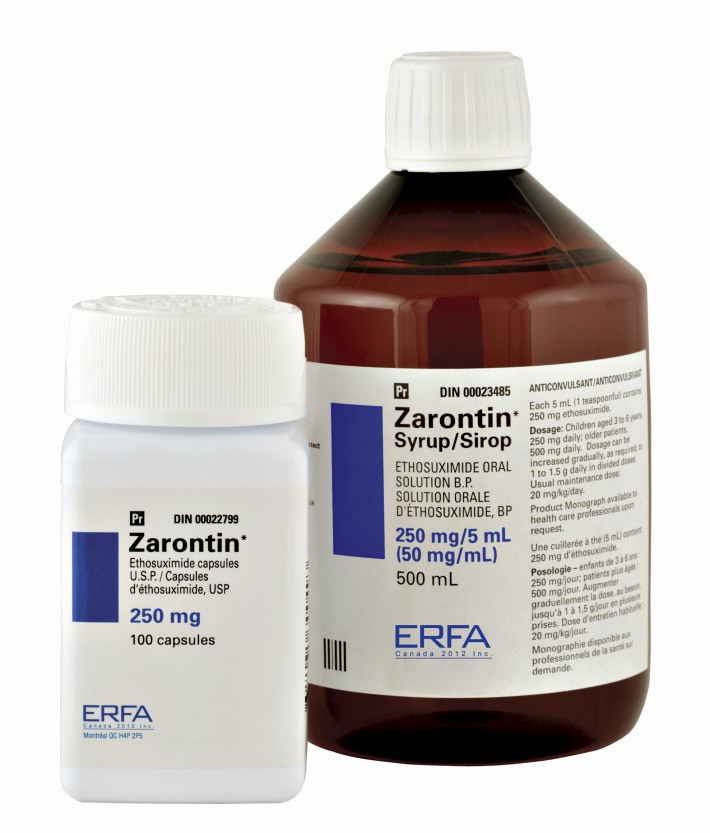 ZARONTIN (ethosuximide) is completely and rapidly absorbed from the gastrointestinal tract. Peak plasma levels occur 1 to 7 hours after a single oral dose. Ethosuximide is not significantly bound to plasma proteins; therefore, the drug is present in saliva and CSF in concentrations approximately equal to that of the plasma. Therapeutic concentrations are in the range of 280 to 710 mol/L (40 to 100 g/mL). Ethosuximide is extensively metabolized to at least 3 plasma metabolites. Only 12 to 20% of the drug is excreted unchanged in the urine. The elimination half-life for the drug is 40 to 60 hours in adults and 30 hours in children.
INDICATIONS

ZARONTIN (ethosuximide) is used for the control of absence (petit mal) epilepsy.

Ethosuximide should not be used in patients who are hypersensitive to succinimides or components of these products.

Blood dyscrasias, including some with fatal outcomes, have been reported to be associated with the use of ethosuximide; therefore, periodic blood counts should be performed. Should signs and/or symptoms of infection (e.g., sore throat, fever) develop, blood count determinations should be considered at that point.
Ethosuximide is capable of producing morphological and functional changes in the animal liver. In humans, abnormal liver and renal function studies have been reported.
Administer ethosuximide with extreme caution to patients with known liver or renal disease. Periodic urinalysis and liver function studies are advised for all patients receiving the drug.
Cases of systemic lupus erythematosus have been reported with the use of ethosuximide. The physician should be alert to this possibility.
Pregnancy: Recent reports indicate an association between the use of anticonvulsant drugs and an elevated incidence of birth defects in children born to epileptic women taking such medication during pregnancy. The incidence of congenital malformations in the general population is regarded to be approximately 2%; in children of treated epileptic women this incidence may be increased 2 to 3 fold. The increase is largely due to specific defects, e.g., congenital malformations of the heart, and cleft lip and/or palate. Nevertheless, the great majority of mothers receiving anticonvulsant medications deliver normal infants.
Data are more extensive with respect to phenytoin and phenobarbital, but these drugs are also the most commonly prescribed anticonvulsants. Some reports indicate a possible similar association with the use of other anticonvulsants, including trimethadione and paramethadione. However, the possibility also exists that other factors, e.g., genetic predisposition or the epileptic condition itself may contribute to or may be mainly responsible for the higher incidence of birth defects.
Anticonvulsant drugs should not be discontinued in patients in whom the drug is administered to prevent major seizures, because of the strong possibility of precipitating status epilepticus with attendant hypoxia and risk to both the mother and the unborn child. With regard to drugs given for minor seizures, the risk of discontinuing medication prior to or during pregnancy should be weighed against the risk of congenital defects in the particular case and with the particular family history.
Epileptic women of childbearing age should be encouraged to seek professional counsel and should report the onset of pregnancy promptly to their physician. Where the necessity for continued use of antiepileptic medication is in doubt, appropriate consultation might be indicated.
The preceding considerations should be borne in mind and ethosuximide should be used in women of childbearing potential only when the expected benefits to the patient warrant the possible risk to a fetus. Mothers receiving ethosuximide should not breast-feed their infants.
Children: Safety and effectiveness in pediatric patients below the age of 3 years have not been established (see Dosage).
Occupational Hazards: Ethosuximide may impair the mental and/or physical abilities required for the performance of potentially hazardous tasks, such as driving a motor vehicle or other such activity requiring alertness.

Ethosuximide, when used alone in mixed types of epilepsy, may increase the frequency of grand mal seizures in some patients.
As with other anticonvulsants, it is important to proceed slowly when increasing or decreasing dosage, as well as when adding or eliminating other medication. Abrupt withdrawal of anticonvulsant medication may precipitate absence (petit mal) status.

Gastrointestinal: Gastrointestinal symptoms occur frequently and include anorexia, vague gastric upset, nausea and vomiting, cramps, epigastric and abdominal pain, weight loss, and diarrhea. There have been reports of gum hypertrophy and swelling of the tongue.
Hemopoietic: leukopenia, agranulocytosis, pancytopenia, aplastic anemia, with or without bone marrow suppression and eosinophilia.
Nervous system: Neurologic and sensory reactions reported during therapy with ethosuximide have included drowsiness, headache, dizziness, euphoria, hiccups, irritability, hyperactivity, lethargy, fatigue, and ataxia. Psychiatric or psychological aberrations associated with ethosuximide administration have included disturbances of sleep, night terrors, inability to concentrate, and aggressiveness. These effects may be noted particularly in patients who have previously exhibited psychological abnormalities. There have been rare reports of paranoid psychosis, increased libido, and increased state of depression with overt suicidal intentions.
Integumentary: Dermatologic manifestations which have occurred with the administration of ethosuximide have included urticaria,Stevens-Johnson syndrome, systemic lupus erythematosus, and pruritic erythematous rashes.

Overdose: Symptoms: Acute overdoses may produce nausea, vomiting, and CNS depression including coma with respiratory depression. A relationship between ethosuximide toxicity and its plasma levels has not been established. The therapeutic range is 280 to 710 mol/L, although levels as high as 1,050 mol/L have been reported without signs of toxicity.
Treatment: Treatment should include emesis (unless the patient is or could rapidly become obtunded, comatose, or convulsing) or gastric lavage, activated charcoal, cathartics and general supportive measures. Hemodialysis may be useful to treat ethosuximide overdose. Forced diuresis and exchange transfusions are ineffective.

Initial dose: children aged 3 to 6 years, 250 mg daily; older patients, 500 mg daily in divided doses. The dose thereafter must be individualized according to response and tolerance. Medicament should be increased by small increments: e.g. increase daily dose by 250 mg every 4 to 7 days until control is achieved with minimal side effects. Daily dosage of 1 to 1.5 g in divided doses frequently controls seizures; however, it may be necessary to exceed this amount by slow increases and careful evaluation of patient's response. Dosage exceeding 1.5 g daily, in divided doses, should be administered only under the strictest supervision of the physician. The optimal dose for most children is 20 mg/kg/day. This dose has given average plasma levels within the accepted therapeutic range of 280 to 710 mol/L (40 to 100 g/mL). Subsequent dose schedules can be based on effectiveness and plasma level determinations.
Ethosuximide may be administered in combination with other anticonvulsants when other forms of epilepsy coexist with absence (petit mal). The optimal dosage for most children is 20 mg/kg/day.

INFORMATION FOR THE PATIENT

Occupational Hazards: Ethosuximide may impair the mental and/or physical abilities required for the performance of potentially hazardous tasks, such as driving a motor vehicle or other such activity requiring alertness; therefore the patient should be cautioned accordingly. Patients taking ethosuximide should be advised of the importance of adhering strictly to the prescribed dosage regimen. Patients should be instructed to promptly contact their physician if they develop signs and/or symptoms (e.g., sore throat, fever) suggesting an infection.